I have developed a few FileMaker Go solutions which use SeedCode’s GoZync tool to sync mobile and server data. One mobile solution required a dozen tables, which GoZync 3 handled fairly well, but took a few minutes to sync. When SeedCode released GoZync 4, they boasted a significant speed increase. Naturally, that made this particular solution a prime candidate to update. Aside from speed changes, GoZync 4 also eliminated dedicated syncing layouts on the mobile and hosted files, moving these to the GoZyncMobile file instead. This made for cleaner customer files. However, migrating a solution built around the architecture of v3 to a brand new architecture seemed daunting.

The SeedCode crew informed me that migration was not that complicated, and an hour or less might be all that was needed to migrate from v3 to v4. While that might be case for smaller mobile files, reconfiguring my mobile file for a dozen or so tables took a little longer. Overall, the process went smoothly, as advertised. Rather than a step by step walk through of migration, which SeedCode already has created, here are some thoughts on the process.

Having a backup of all files is crucial. Don’t just back up the mobile file, but also your hosted file (or mothership files, as SeedCode calls them). Once you’ve completed your migration, you can clean out your old syncing layouts in both files. With backups you can revert to good copies if anything goes wrong.

Migration is almost like a brand new integration. With GoZync you deal with at least five (5) files:

However, all connections to the mobile and hosted files are made in GoZyncMobile, and integration then takes place in GoZyncHosted as before. In GZM, setting up the connections in the Relationships Graphs is simple. With the GoZync TO in the middle, you add hosted files on one side, and mobile files on the other. (See diagram 1.) 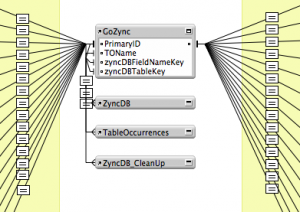 Once your mobile file is set up, the next item is to configure your hosted file. The interface has changed since  v3. You still sync each table, but the process makes it easy to get an overview of all tables being synced. You also can set certain tables to either push, pull, or both. (See Diagram 3.) Some of my tables were for reference only, and so I ended up pulling down half the tables, and both pushing and pulling the other half. 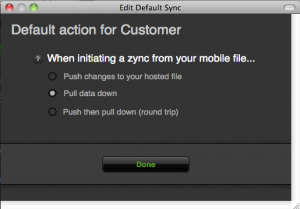 Diagram 3: Interface to sync each table

Then, it’s just a matter of replacing the scripts in your mobile file with the new scripts from the sample mobile file, hooking up the buttons, and syncing to test. I found that GoZync 4 is significantly faster than v3.