Within the FileMaker community, there seem to be several subcultures. Music, photography, woodworking, and knitting just to name a few. At DevCon, we used to have a jam session that was generally packed with too many people wanting to play and sing. We had to impose limits such as only play for 3 songs, and then hand off the guitar or drum kit to the next person in line.

As a musician, I wondered if there was a link between music and FileMaker development – perhaps they are both forms of creative expression, or linked to skill in logic and math? Is there a correlation between expertise in the two fields? How many developers are also musicians?

The Survey: Musician or Not

Matt Navarre and Alexis Allen, both musicians and developers, devised a short survey to hopefully answer some of these questions. Alexis was a little skeptical, since she knows lots of musicians who aren’t terribly good with computers. Matt was more confident, having been at those jam sessions, waiting in line to play guitar.

In a 3 week period, we got 95 responses to the survey, which is a pretty small sample size, and hopefully enough to draw some conclusions. 80% of people surveyed reported being musicians. I suspect that number is skewed, since this was called the ‘FileMaker music survey’, and was more likely to attract a musician.

That means musicians are twice as likely to be database experts. This strong correlation is perhaps the most surprising data in this survey. We are making no claims of causation here, but we sure wonder what causes expertise in databases.

Of those with undergraduate or graduate music degrees, 72% claim to be experts. This seems to indicate the that more expertise you have as a musician, the more likely you are to also be an expert with FileMaker. This is strong evidence that there is indeed a link, and that musical training (and not merely talent or skill) somehow influences your ability to excel in FileMaker development.

Link Between Music and FileMaker

One of the questions we asked was whether you perceive a link between expertise in music and FileMaker. 58% of the non musicians reported zero link, and only one person reported a significant link. 18% of the musicians reported zero link, and 30% reported a significant link. The remaining 52% reported a small to moderate link. This seems to indicate that if you are both a musician and developer you’re far more likely to perceive a link. What would the nature of this link be? Does it make it easier to learn the “language” of FileMaker? We didn’t ask, but it’s an interesting question too.

Perhaps the link is not directly in the music skill, but in the ‘learning how to learn.’ To become a musician, you need to develop a skill set and understanding of a symbolic language, learn new pieces measure by measure while continuing to understand and perfect pieces as a whole. These skills may translate well in learning database development.

We asked questions about several artists and composers. This was to determine what genres of music people prefer, and we also inserted a few obscure artists as trick questions to determine the depth of knowledge in some genres. For example, Heinz Holliger (an amazing classical oboe player) was unknown by 84% of all people taking survey. Of those that do know (and like) him, all were musicians. 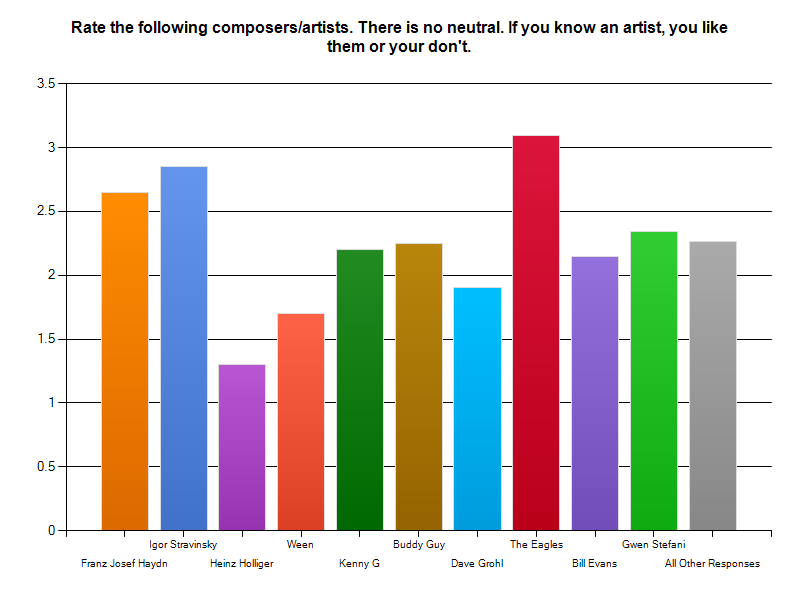 The runaway winners that were liked or loved were The Eagles at 81%, and Igor Stravinsky at 74%. That last one really surprised me.

The most disliked by far was Kenny G at 60% dislike (but 26% who like that no-talent clown that started winning grammys. Oh wait, that’s Michael Bolton.) Overall when you include the ‘Like’ and ‘Dislike’ though, it evened out a bit.

We asked people what career they had before FileMaker, and there was certainly no consensus here. Less than 10% worked in a music related field. A career in an IT relate field seemed to be the most common, at about 18%. The list included doctors, lawyers, students, and a wide array of other fields. It made for very interesting reading.

Our science-style (yet completely unscientific) survey didn’t address a couple of things it would be really cool to know. Is the rate of musicianship higher in FileMaker developers than tech generally? What is the nature of the links people see between their musical training and their FileMaker activities?

Still, the fact that expert musicians were more likely to report expert FileMaker skills does seem to support a correlation. So, all those hours your mom made you practice the piano weren’t a waste after all, and if you’re a struggling musician, maybe you should think about a career in FileMaker to help pay the bills.