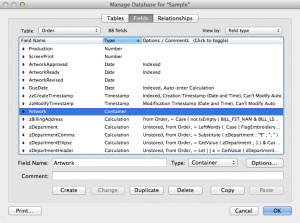 Recently, I converted two customer databases from FileMaker 11 to FileMaker 12. Both customers were embedding documents in the database by inserting them into container fields. The result in each case was database bloat—a file size much larger than necessary (1GB or greater).

The disadvantages of a large database in FileMaker are several including slower performance (more data to push over network), lower productivity (long wait times during backups), and greater risk (more susceptible to corruption in the event of a crash). Fortunately, FileMaker 12 has a new feature called Enhanced (or external) Container Fields to address this.

For each database, I converted it by dragging the file onto the icon for FileMaker 12 and going through the automatic conversion process. Next, I opened the database and sorted the field list by “field type”. 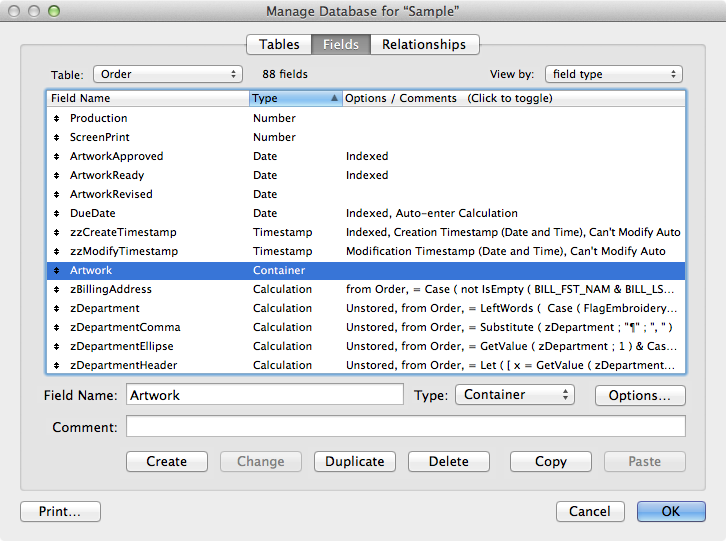 Next, I went through each table looking for the any container fields. (You could also use BaseElements or Inspector to search by field type.) For each container field, I changed the storage option to “Store container data externally” under Field Options. 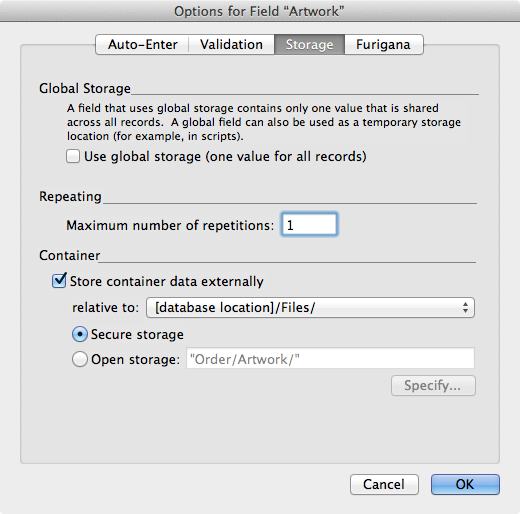 Finally, I closed the Manage Database window to save the changes. FileMaker Pro started moving the documents in the container fields to a folder called “Files” outside the database. It then compressed the database to reclaim the unused space.

The results were impressive. For the first database, there was one container field in one table with 68K records. Each record stored one thumbnail image. By moving the container data to external storage, the database size was reduced 46.5% (750MB to 400MB).

For the second database, there were twelve container fields in one table with 750 records. Each record stored multiple images and PDFs that were not optimized. Moving the container data to external storage reduced the file size by 99% (2.3GB to 3.4MB)

The conclusion is obvious. Stop embedding documents in your database! It increases the file size unnecessarily and creates the negative effects mentioned above. Of course, you have to upgrade to FileMaker 12 to take advantage of this new feature. The only caveat is to test the functionality of the new database before deploying it to production (just in case).

The assignment was simple: A report is not sorting correctly. Fix it. Easy, right?

Little did I know that by taking this assignment I was about to pull out the pebble that would open up the dam. A deluge of trial and error later, the report was fixed, and I was a more knowledgeable developer.

This is a story that happens every day. Somewhere right now there is a developer  (maybe you?) drowning in a scenario that is threatening to rob time, money, and reputation from him or her. How do you get through it? What does it look like to work through a problem until it’s solved?

As an example, this post will attempt to describe what it looks like when I brainstorm a problem and try to innovate or at least stretch my own boundaries as a developer. I hope this story inspires you to not give up, but to keep researching, asking, and discovering for yourself. There is much innovation to be had, and you could be the one who discovers the “Next Big Thing” that we talk about at DevCon! Those opportunities come through perseverance through tough problems.

I think often times we (me included) view the more “famous” developers as if they’re immune to working hard or being stumped. The reason they make things look easy is because they don’t give up when things get difficult. In fact, I propose that if you want to innovate, you need to embrace the more difficult problems – invite them, in fact. Taunt them with trash talk before you dive in. The hard problems are fertile ground for the very thing we desire most: innovation. If you decide in advance that you’re going to solve this problem and solve it well, then all that’s left is to do it.

This story is also about being honest about where innovation comes from. Throughout this adventure, I’m going to document where the work of others directly influenced the outcome of this project so you can see that I am only as brilliant as the developer next to me. I’m constantly cheating off someone else’s paper! Except, in the FileMaker community, it’s not cheating. It’s expected. This particular community seems to understand that all human innovation is built on prior art. I for one am not ashamed to say it out loud, so I will always try to happily give credit where it’s due.

Here’s the background to the report I needed to build:

The first attempt (made by another developer before he wisely handed it off) was with sliding portals in the parent table. The process was roughly:

This is where I picked up the project, trashed the portal-based report and started from scratch.

During discovery, I looked for a key/ID field that linked the parent record to all of the child records in the different portals. There was a field that was labeled appropriately enough, but when I threw it out on the layout and compared it to the key fields in the different portals, it only matched some of the line items. It also had a pipe character at the end of it. It looked like this particular key that was supposed to link parent and child records was parsed by some other process, and I didn’t want to break it. So I had no parent/child linking field to work with. It is what it is, and, there was nothing I could do about it.

Defining a new key field over 750,000 records didn’t sound appealing, much less over the 5,000,000 child records. So I started looking for a way to extract the data while keeping the records together and putting the extracted information into a merge table of some kind. After all, the ultimate goal was simply display. All that mattered was that the data was in the right order.

Coming fresh from FileMaker DevCon 2011, I decided to try a virtual list for this report. The routine was something like this:

This technique worked over a small found set, but once the combination of parent and child records exceed 1,000, I started to see the CPU usage go way up. This would never work with 100 users in the system, and it would be devastating if two users ran the report at the same time!

Using the script debugger, I started isolating sections of the report script and watching the CPU meters on the server. I ended up finding two problems: 1) simply navigating from record to record and stepping through the portals was costing me dearly and 2) the report was made up of six fields that were all unstored calculations that were trying to find their values within a thousand lines (or more) in each of six variables. That’s a lot of calculating, and a lot of CPU usage.

So, the virtual list idea as a whole was down, but not quite out. I had the follow-up idea that I should just collect the keys (IDs) for the records in variables, instead of all the field values themselves. This would be far less hassle for both data collection and calculating.

First, I tested to make sure that virtual keys were acceptable to FileMaker and reliable.  You never know what kind of mess you might step into when you’re working unconventionally. Sure, an unstored calc field might work on one side of a relationship, but that doesn’t mean it’s reliable in this case. Ultimately it was.

Then I built a single key field and related it to the parent and child tables. (How efficient of me, right?) Then I used the relationship to determine if the ID represented a “header” record in the report, which in pseudocode would look like this:

The script looped through the records, gathered the keys into a variable, passed the variable to the target file, and the field definitions in that file parsed the keys out into their records.

Again, this setup worked mostly. But I was getting some weird results (like header records that were also non-header records), and I still hadn’t found a replacement for looping through records when grabbing all the keys to begin with.

Problems With the Data = Good

Well, this is where I found out that the system is not using universally unique keys. In other words, the IDs were not unique from table to table. So when my key field definition went looking for a match in the parent table, it often found one, even though it was a child key that had been parsed out. That’s what was causing my weird results!

However, this was a wondrous accident. While investigating the key fields, I found that the field in the parent table (that supposedly linked to the child table but didn’t) actually had two values in it, not just one, thus accounting for all the children records! Breakthrough!

What had happened is that when I threw the key field on the layout before, I never resized it, or clicked into it because I could see the full value of it. When I saw the pipe character at the end of it, I recognized that from elsewhere in the system as being a parsed value, rather than a divider between two different values.

When I discovered this, I thought I might be able to just take the parent keys off to the side in my report table and walk through them there. I could now build a relationship to all the child records of a given parent key, and somehow work with that.

So I built the six relationships off of the Report table, and tried again:

This time the problem was that I needed to commit the record each time I put in a new key field so that it would forget the relationship this record had last time and display the new data. I tried building in a constant predicate into the relationship so it would refresh by setting a single field to “1” – which I learned from Todd Geist via his post-DevCon video about Commit Record, which you should see if you haven’t.

Unfortunately, that didn’t help. It seemed to be as slow as replacing the field contents itself. So I found myself somewhat back at square one. I decided to shift my thinking to the CPU usage associated with navigating from record to record in the parent table.

Next, I tried blank layouts based on the parent table, so that no other fields but mine were being queried while I navigated record to record. That did help, in fact. I got both an increase in speed, and a decrease in CPU usage. But it was still less than awesome. I knew I could do better.

At this point it was time to sit back and rethink the problem with a clear head. One family board game and a good night’s sleep later, I decided to take a trip through Google to make sure I wasn’t missing anything related to FileMaker speed. I was looking for two things: collecting data as quickly as possible without looping, and best practices for when you absolutely had to loop.

Next, I stumbled across an article from HOnza Koudelka called FileMaker Script Execution Time Cut From 5 Hours to 6 Seconds. That sounded like he had written that article just for me. The main takeaway from that article for me was this: “…the fix often is as easy as replacing the stupid solution with the normal one.”

While I was all fired up about the virtual list and innovating, I still didn’t have a workable solution. What if all I needed to do, as HOnza suggested, was something more traditional? At this point it was worth a try. I was running out of time!